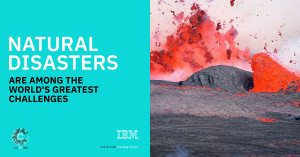 Back in 2010, a colleague and I started working on a project that would later become a startup called Geoloqi, a low power GPS solution that focused on privacy and control over your data. GPS wasn’t even available on iOS or Android devices yet, so we used Boost Mobile phones and Palm devices.

When we built our API, we realized that the best way to test it would be to take it on the road – so we did. We brought our API to hackathon after hackathon. We thought that if we could use our technology to build solutions good enough to win hackathon prizes, then we might have something that we could scale. It was during the hackathon process that we learned the most. Even if we didn’t take home a prize, we practiced working together in better ways, and we came up with ideas we wouldn’t have if we didn’t rise to the challenge of time-constrained work.

Our favorite hackathons were in the disaster relief space. Open Government, emergency preparedness and civic responsibility organizations were an incredible way of bringing data to life with location. A year later, we were a larger, seed-funded company, and in 2012, we were acquired by mapping giant Esri, a company known for providing governments and citizens with crucial mapping for disaster planning.

This is why I was so excited to hear about the Call for Code initiative. This is the kind of hackathon we dreamt of when we worked on our startup. And the prize is $200,000 USD! That would’ve been enough seed funding for a year of our startup (we raised 175K for our first product).

2017 was one of the worst years on record for #naturaldisasters. There a many ways to use technology to better handle response, translation, prediction and management of #weather events to reduce risk, loss, and damage when they happen.

The Call for Code Global Initiative is the largest and most ambitious effort to bring startup, academic, and enterprise developers together and inspiring them to solve one of the most pressing societal issues of our time: Preventing, responding to, and recovering from the chaos caused by natural disasters.

Who and how can you participate in Call for Code?

All developers, designers and entrepreneurs who are over the age of 18 can participate. Developers can register as individuals and submit an application later as part of a team of up to five members. Projects can be entered between June 18, 2018 and August 31, 2018.

Thirty semi-finalists will be selected in September. A prominent jury including some of the most iconic technologists in the world will choose the winning solution from three finalists.

The winner will be announced in October 2018 during a live-streamed, all-star benefit concert coordinated by the David Clark Cause.Call for Code participants can use IBM Cloud, Watson, Blockchain and IoT technologies, along with open source IBM Code Patterns – curated reusable packages of documentation, architecture diagrams, process flows, and access to underlying code on GitHub – to innovate and build submissions.

Click here for more information and register your participation, and contact Anders Quitzau for any further questions!