The History of the Compass Lifelogging Application 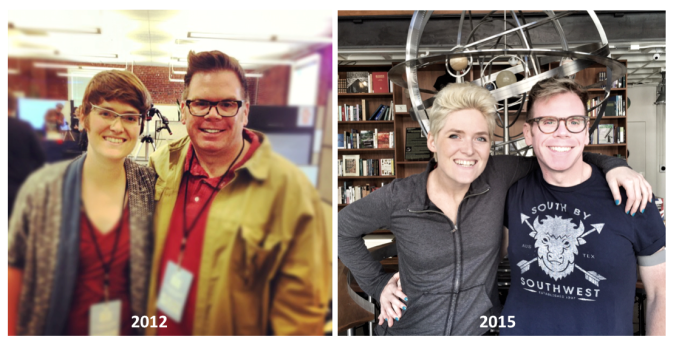 In 2012 Chris Dancy went to Amber Case’s CyborgCamp, an unconference on the future of humans and technology. He wanted to show her a project he’d been working on for the last three years, over 600 different datasets of Dancy’s locations, activities, sleep patterns, weight and other data, color coded and synchronized with Google Calendar.

Origins of a mindful cyborg: Case and Dancy at CyborgCamp Portland 2012 and in 2015.

With this much data, Dancy was able to gain an entirely new perspective on his life. He was able to correlate sleep with weight, sadness or happiness, or even the effect of air quality on his driving.

For the first time, all of these different data sets were in one place – the ultimate personal perspective. Case was excited to see this and suggested he show it during an unconference session. Though Dancy was nervous – this was his private data after all – Amber didn’t give him a choice. Case switched the projector on to show Dancy’s work to everyone in the room. The work inspired dozens of questions and a long discussion. Klint Finley, a reporter from Wired, was part of the session and wrote an article on Dancy. The rest, as we say, is ‘Christory’.

The World’s Most Connected Human

One year later Chris made his way into the larger world as “The world’s most connected human”. He’d stopped smoking and completely changed his behavior, but there was one problem – only he could use his system. It allowed him to see activities in a new way, lose over 100 pounds and significantly improve his life, but the system was an expensive undertaking that required a lot of time and effort. Dancy wanted others to be able to see their lives over time. It didn’t seem feasible or fair that we might need 600 applications and devices in order to understand their lives. With so much data, we run the risk of becoming so connected that we don’t have any time to reflect. Dancy wondered what anyone might be able to do with just the sensors on the phone. Case suggested he find a company in the space and seek their support.

Preview of the Compass app for iPhone.

A few years later, Chris found Healthways, a Nashville-based company with success in the wellness industry and recruited Case to work with him. Healthways invested in the project, and this week, the first results of their collaboration, an iPhone app called Compass was born. Tracking behavior is useful only when you can connect to other behavior in your life. Compass surfaces insights from your phone and shows you how you live your life. Too many hours at the office? Eating right? Flu got you down? Too much phone light affecting your sleep? Compass helps you to see what’s affecting you, and how it affects you. Our vision with Compass is for it to be an interface for your life, and to change your future. In a world of non-stop information, we could all use a bit of reflection – followed by action!

Compass is being made available as an alpha to attendees of the Quantified Self Conference on June 18-20, 2015 in San Francisco, CA. Interested? Sign up for the alpha at existence.io, or stop by our conference booth during QS15 and say hello! Or check out @mycompassapp on Twitter.

Where do we go from here?

We’ve tried to distill the best methods and insights from Dancy’s tracking process, but it will take time to get there. We’re looking for feedback and soliciting people to become alpha testers for the app. There are so many non-connected devices out there. It’s not about what you track – it’s about what happens when you tie what you track together. We’d love to know how we can improve Compass to help you understand your life better.